Skip to content
I regularly hear people preach about how We only turn to God when there is tragedy or we are in need of something…   I don’t know how true that really is.  I wonder if it isn’t a matter of vocabulary…helping people expand their ideas about God language and those moments that can be acknowledged as directly connected to God’s self-revelation.  Marvel, fascination, curiosity, wonder, awe, appreciation, beauty, stamina, strength, courage, passion…All capacities to encounter God in the midst of the daily whatnot of our lives.  Sure, sometimes they are more tuned in than others…we are more “present” sometimes than others… The key for me, though, when that happens, is to realize that even when I am not entirely present, God is.  “Let me behold you…” What a beautiful reflexive prayer that is…
Here are three Behelds from this past week… three encounters of different sorts…
From Way Back, there was family lore about me, spiders, and Kleenex.  It didn’t matter how many layers were used to contain the corpus aranea, I KNEW I could feel the lump.  And that bothered me.  With years came enlightenment about the goodness of spiders and their place in the universe (which, thank you, is STILL NOT MY BEDROOM—but when I find them I move them instead of squish them, at least when living places where the chances are high that they are non-venomous) and I can appreciate their vocation, their artistry, and their resilience. 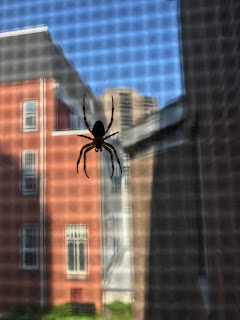 For weeks now, there has been a spider living between the screen and the window pane of our casement kitchen window.  It is an agreeable place for her or him…protected and yet open for supper.  I have to say, I have grown rather fond of the octoped and check on him or her every morning as I stand at the sink to fill the coffeepot.  A familiar presence who clearly desires to stay.
I think half of us thought there was something familiar in this next encounter.  Toward the end of the week last week, I was walking up Summer from the Halifax infirmary and while I usually tuck into the Public Gardens and wander home that way, I stayed on the sidewalk.  Somewhere after the second crosswalk, this young (maybe 1 or 2 years old) child came buzzing up to the fence line from within the gardens as soon as she saw me. She had  BIG smile, all kinds of waving and Hi-ing were going on… Who knows who she thought I was or what she saw in me, but the simple honest joy of that greeting absolutely made my day.  She wouldn’t leave the fence until I did.  Her parents were laughing, I was laughing… She continued to look at me with such a blue intensity…all I could think of was “Here’s an old soul in fresh clothes…”
Last evening I had the good fortune to go hear Measha Brueggergosman as part of the Cecilia concert series here in Halifax.  And I think her voice must come from that place where the old souls wander… The musicians she had playing with her —three violinists, a cellist, and a pianist, were each extremely talented and played with a theatrical mix of flair and technical prowess that demonstrated the degree to which each one of them finds union with their instrument so that together they produce such incredible emotion, scenery, sound-paintings, Story.  Measha too cuts quite the theatrical figure on stage…I’d dare say she could tell a whole story with a lift of the brow and a look in the eye.  And her singing…oh, glory.  She sings from within the space just beyond the arrangement of notes…As though she is within what is described by the notes and is telling that story—And as her telling passes through the lacework of the notes in their coming together, music is produced.  The Story becomes music…enchanting music that is big, wide, deep, and Right There…yet somehow, just enough beyond that you know you can’t stay.  It was a glorious visit, though…glorious.
Thank you, God…for this and for all.