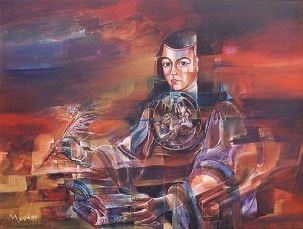 Last Wednesday morning while I was reading and praying, I came to discover that it was the feast day of 17th century Mexican poet, scholar, and religious, Sor Juana Inés de la Cruz. I do not study to know more, but rather to be ignorant of less. I first posted this quotation on Facebook with a slightly different translation– but rather to ignore less… which I also liked. Rightly or wrongly, I associate ignorance with head knowledge. But studying in order to ignore less…that speaks to me of paying attention to what is outside and being able to consider it deeply within the heart and mind because one has knowledge of it, or knowledge that allows one to approach something with curiosity and possibility… or, as Wordsworth put it…

While with an eye made quiet by the power/ Of harmony, and the deep power of joy,/ We see into the life of things.

I was quite content with this bit of contemplation…turning it over in my mind and heart as I made my way through the day. And then! Then a dear friend who knows me well forwarded me a set of photographs she had taken of a placard about Sor Juana which included the line “…she spread the meaning and significance of cooking as a creative act of love.”

Sor Juana Inés de la Cruz… the original “poet in the kitchen!”–a moniker I have used frequently. I love knowing this about her and the feeling of kindred connection over the centuries.

Holy Thursday brought a different connection –this one over thousands of miles. I began the day praying with a friend over Google Hangouts. It was a beautiful use of technology…she had set up a prayer space we could both see and included a bowl of water for washing the feet of those we offered in prayer… There was such a simple beauty about it…about the space but even more about the connection, about the deep quiet, about being before God and offering anew our lives…in service and vulnerability…to a world in need…and remembering too that it was around a table, in the context of meal, celebration, leave-taking, blessing.

Both of these experiences came with me as I spent time in contemplation with pots and Pyrex in the kitchen that afternoon. And I am utterly convinced that the mushroom stroganoff was richer for it. What a lovely while it was, preparing a meal for my community…witnessing the chemistry…guiding the favors…whisking occasionally and letting it be…attending both to the wonder of what was taking shape and the nourishment it would offer others…noticing how much it meant to me to be a part of that and to be absolutely present.

That evening I went to mass at a local university. The music was grand, the people both celebratory and solemn…the symbols were well used and the ritual thoughtful. Within that environment, the day was made whole and I had the sensation of being entirely together…entirely together and at the same time nearly inside out, expansive, everywhere, dispersed in Love. 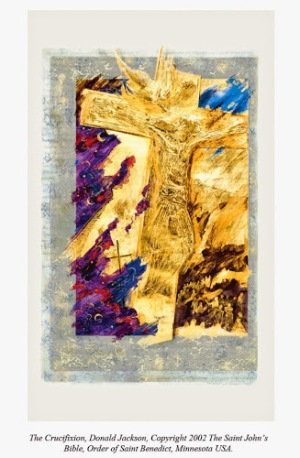 I spent Friday mostly outside…the wind became the shouts of God witnessing the suffering of the world and flowers, though created by God, were also reminders to God of the deeper hope, the insistent call of Life…

The wind became the chaos of voices in our world…voices calling for condemnation and violence, voices shouting to be set free, voices wailing with fear and keening in loss, silent voices in the pause of the breeze, staring voices, unable to carry the quake of sound…

And the flowers bloom on, and the trees are in bud, and the sun was brilliant and warm… reminding me, reminding me.

Holy Saturday brought time with another friend and helping her prepare food for a gathering as well as another glorious celebration at the university…water flowed, oil was lavished upon heads, bread was broken, Light bloomed and spread, great song was raised and the Alleluia rang from tenor and timpani, child and elder! Even with all of this, though, the homily was what brought it together for me…it spoke of the relationship between grief and love…the embrace of one is the freedom for the other. It was transparent and invitational…give in to our humanity…live it well, live it wholly, live it in the company of God and as witness to the fullness of Jesus…alive, risen, and ever so present.